“My long term goal is to translate scientific research in lung cancer screening to implementation at the population level and to improve lung cancer outcome.” 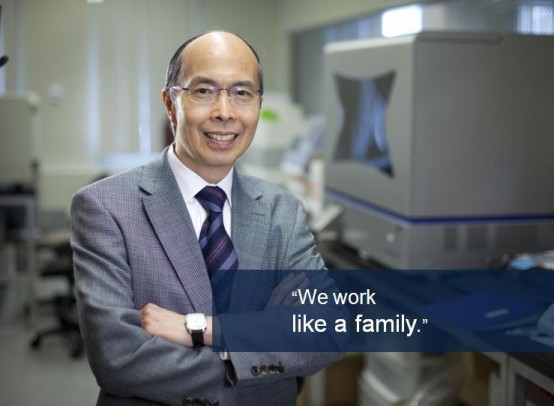 Dr. Stephen Lam is a Professor in the Department of Medicine and a Distinguished Scientist in the Department of Integrative Oncology at the BC Cancer Research Centre. He chairs the Provincial Lung Tumor Group at the British Columbia Cancer Agency and directs the MDS-Rix Early Lung Cancer Detection and Translational Research Program at BCCA.

He graduated from the University of Toronto Medical School in 1974 and completed his residency and fellowship training in Internal Medicine and Respiratory Medicine at the University of British Columbia associated hospitals. After a post-doctoral fellowship at the Massachusetts General Hospital and the National Cancer Center Hospital in Tokyo, Japan, he joined the UBC Faculty of Medicine in 1979.

His research is centered around early detection and chemoprevention of lung cancer. In the early 1990s, with colleagues at BCCA he invented the Light Induced Fluorescence Bronchoscopic (LIFE) device for localization of pre-invasive and early invasive lung cancer. He pioneered clinical application of other endoscopic optical imaging methods such as optical coherence tomography and Raman Spectroscopy. He was among the first in the world to use photodynamic therapy to treat lung cancer. Currently, he is the lead investigator of the Pan-Canadian Early Detection of Lung Cancer Study that has developed a web-based lung cancer risk prediction tool to identify smokers at sufficient risk for screening with low dose CT and for calculating the malignancy risk of lung nodules discovered by CT screening.

Dr. Lam has published over 200 peer reviewed scientific papers, 32 book chapters and 20 patents. He has been a frequently invited speaker in many provincial, national and international conferences. He was the recipient of the Friesen-Rygiel Award for Outstanding Canadian Academic Discovery, the Gustav Killian Medal by the World Association of Bronchology for his pioneering contributions to the field of early lung cancer diagnosis, the Distinguished Achievement Award from the University of British Columbia, the Joseph Cullen Award for life-time scientific achievements in lung cancer prevention research by the International Association for the Study of Lung Cancer and the UBC Killam Faculty Research Prize. He is a Honorary Professor at Tonji Medical University in China. He chairs the Canadian Partnership Against Cancer Expert Panel on Lung Cancer Screening. He is also a member of the International Association for the Study of Lung Cancer Strategic Screening Advisory Committee steering group and chairs he clinical work-up group of the Canadian Lung Cancer Screening Network.

What attracted Dr. Lam to UBC are the people. “We work like a family”, said Dr. Lam. He attributes his success to his mentors Professor Stefan Grzybowski and Professor Moira Yeung as well as his many multi-disciplinary colleagues and international collaborators who generously contribute their intellect and time towards a common goal to reduce the morbidity and mortality of lung cancer and to improve the quality of life of lung cancer patients. He greatly enjoys the intellectual challenge of his undergraduate and graduate students and post-doctoral fellows whom he believes keep him green and productive